I am eagerly awaiting Spring, I don’t deny the fact that I am so over this winter. And, I was even out of the country for the worst of it. This is very uncharacteristic of me, I tend to love winter. Sitting by the fire, ice skating and winter jackets are all things that bring warm fuzzy memories. I don’t know when I started to dislike winter, but it was probably around the time I moved to D.C. I mean it is hard to enjoy winter when there is little to no snow, because it rains instead. I also do not enjoy the constantly changing temperatures. One day it is 60 degrees and the next it is 30 degrees. What a tease.

To avoid the winter rain while still enjoying one of my favorite weekend activities of walking around a market, I set out to Union Market in Northeast D.C. It is a relatively new, inside market, with all the excitement and diversity of a larger market. 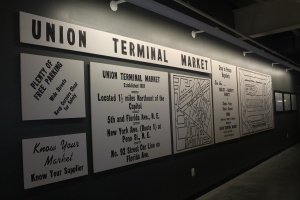 Union Market, originally Union Terminal Market, opened in the 1870’s near Union Station between the White House and Capitol buildings. Over years of change in the city and government regulation the market became an all indoor market when the city banned the sale of meat outside in the 1960’s. By the 1980’s the market had been abandoned from wear and tear. Also, people began enjoying the conveniences of the suburban supermarket.

Today, Union Market hosts artisan food vendors and shop owners. The market sponsors events on a weekly and seasonal basis. But the best part about Union Market is that the community has begun to enjoy the amenities like brunching and drinking away a Saturday afternoon at the market.

While my trip to Union Market did not include a beer or bloody mary, I did indulge in some ice cream, made locally at dairy farm.  I also explored some other dairy delights…cheese.

While Union Market is all about local, some vendors bring in specialty foods from all over the world. Righteous Cheese has an array of cheese, all available for sampling. I purchased a sharp and tasty Spanish sheep cheese called “Zamorano”. 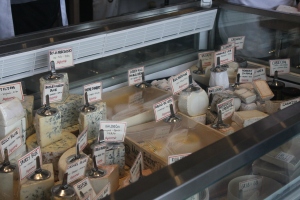 Off the Beaten Path

Part of what draws me to Union Market is the obscurity. Union Market is located just enough off the beaten path, allowing it to still be considered “cool”, well at least in my book. Eastern Market is about a mile from Union Market, but has been crowded for years now with families and college students. Union Market has yet to be tapped. It’s good for small groups, especially the foodie types. This is a must see spot for those looking to see more than the Capitol dome and the Ford Theater.

One thought on “Rainy Day at Union Market”